Hey, it’s Ashleigh here, and the climate fraud is more fake news appearing real, this time Alaska’s supreme court hearing an insane case of kids who want to shut down fossil fuels and thrust us back into the 1500s.

Climate Fraud has been with us for, like, forever. I’d like to sue annoying snot nose kids who think they know how the world works….

…just because they’re 14 years old and have been on the Internet since their stupid parents thrust an iPad into their hands to shut them up during dinner.

You don’t know anything, you snotnoses. And nobody should give you the time of day until you grow up a little.

“When I want a boost of testosterone, I just pop one of these into my mouth.

“I could be with my wife in the bedroom. Or facing a room full of guys at work. When I want more confidence, it’s a simple Booster Bite and in moments I feel that surge of testosterone.

I was a moron at age 14. I knew everything. Mark Twain supposedly said:

“When I was a boy of fourteen, my father was so ignorant I could hardly stand to have the old man around. But when I got to be twenty-one, I was astonished at how much he had learned in seven years.”

If the world is warming up so alarmingly, why is Antarctica ice expanding according to NASA scientists?

Netflix has a phony lying documentary about walruses falling to their deaths, but there are more walruses than there have been for decades, and the show scene was faked.

Did you know that CO2 emissions have been DECLINING in the US for decades? Except for our Chinese friends who plan on building hundreds of new coal power plants that spew out toxic gas and pollute the oceans…

Yes, the big red solid line heading up the sky? That’s the Chinese. The Americans and Europe are LOWERING emissions. Shut the f*** up you 14 year old snotnoses. 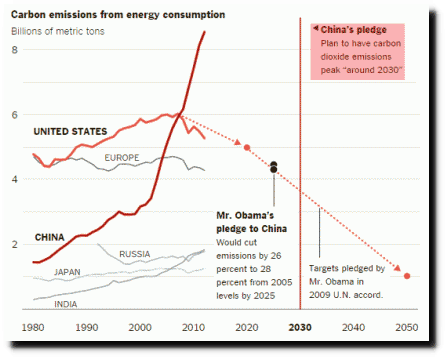 On the Impeachment Fraud front, somehow more witnesses are trotted out who “overhead” and were “disturbed” by the phone call between Presidents Trump and Zelensky...and nobody talks about the fact that we all read the transcript and it didn’t have anything disturbing in it.

The real story is how the FBI and CIA spied on the Trump campaign in 2016 and then spied on President Trump and is conspiring with the Left to unlawfully depose a president that the people elected.

Now they are trying to get rid of Trump first, and searching for a reason to do it second. This is how the Soviet show trials were held.

The New York Times admits there is a Deep State against Trump. Maybe they didn’t mean to do it, but they wrote about it.

The New York Times even quotse Ronald Reagan: “the nine most terrifying words in the English language are: I’m from the government, and I’m here to help.”

“I found this 2 step size system helps increase my size as a man, and also increases my male blood flow”

The op-ed piece complains, “In the last three years, the president and his aides have challenged government expertise on everything from hurricane tracking to inaugural crowd size.”

Yes, it’s about time. Someone in the White House knows that Fake News Appearing Real is the main way the Deep State operates.

But don’t have free speech in the USA. The Left hates it.

Indeed, a new poll reveals that most Americans are against free speech and think that people should be jailed for their speech.

Dave told the extreme Left audience, “The First Amendment is first for a reason. Second Amendment is just in case the First one doesn’t work out.”

Sponsored: Dr. Ari Magill, MD, board certified physician, has found these 5 mistakes men make that lower their testosterone and ruin their bedroom performance.