This vitamin brew revs up your metabolism and restores teenage stamina.

It seems Biden’s genius son Hunter had done a bad deal and Ukraine was investigating Hunter.

“Back off,” Biden told the top guy in Ukraine, “or we will take our $1 billion and go home.”

It worked. Until now. So the Dems are struggling.

Speaking of struggle, turns out the New Fake Times reporter coached the “Kavanaugh source” as to what to say… It was a non-story anyway, but we now know it was a fake non-story.

Do you think the Left cares? Trump bad. Kavanaugh bad. Any way to smear these people and destroy them is just peachy.

And Russia of all places has it right.

They are saying that they don’t need no stinkin’ aircraft carries (like the US has a-plenty) because of a very strange but true reason.

Did you know that one decisive battle ended the reign of battleships forever?

And now, the destruction of half the Saudi oil production resources by them Houthis shows asymmetric warfare has RENDERED OBSOLETE every weapon the US has.

And this is at heart the phony “War on Terror.”

Any nutcase with a molotov cocktail or a car can knock out a bunch of peeps.

This is why we have to stay the f*** out of all these other countries and leave them alone.

It’s a new age now and there is no stopping it. The little people will destroy the big people’s weapons. “We don’t need aircraft carriers, we need weapons to sink them with.”

Who The Heck Is This Greta Thunberg Kid?
By Dorian, a highly placed Washington insider who reports anonymously 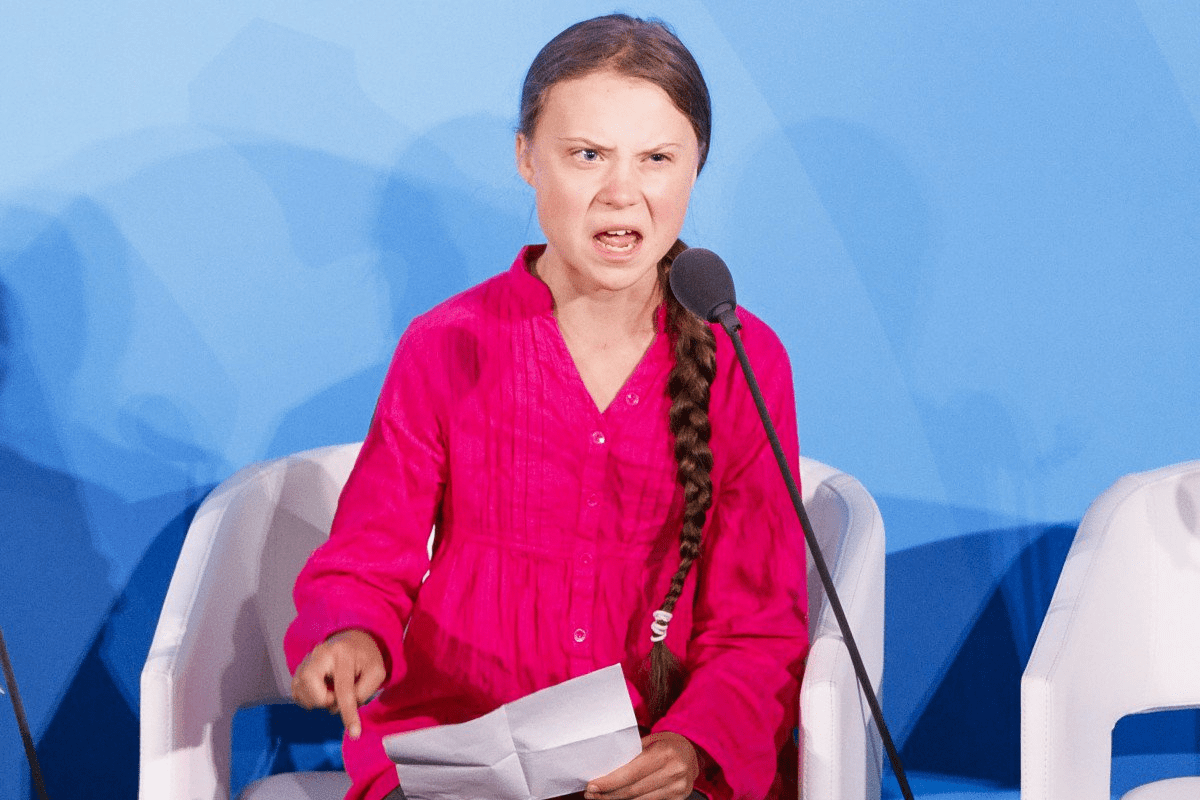 As we know from Donald Trump she’s a happy young girl looking forward to a bright future. 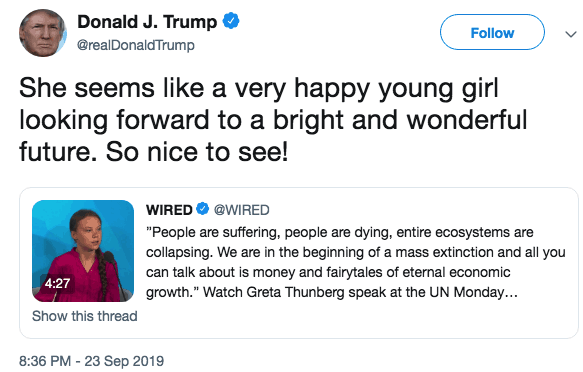 Or maybe not so happy as all that. So, who actually is she?

So the story is, she started by not going to school and instead sitting outside the Swedish parliament saying she was on “climate strike”.

This then became the big new thing around the world and millions of children are shouting that we’ve got to do something about their futures.

Greta Thunberg has her problems – she herself says she’s on the spectrum.

She also claims to be able to see carbon dioxide molecules in the air. This isn’t true, no one can do that.

Her parents are obviously driving this – they’re well connected to both the media and also more extreme environmentalist groups.

Their whole game is to use the environment as the reason to kill capitalism and freedom. Because that’s what they want, the environment’s only the excuse.

…a rather confused and ignorant young girl who is being taken advantage of by her parents and other political actors.

As Jesus himself pointed out those who harm the children deserve the millstone around the neck and the deep blue sea. We can only hope this happens soon.

Maybe worse than the manipulation of the innocent is that everything she’s told to say about climate change is wrong.

Yeah, obviously, there’s a lot wrong with most of what’s said.

But even within the stories we’re told about how terrible it will be she’s still wrong.

For example, she says economic growth has to stop.

But in all that stuff from the IPCC, the Paris agreement, all those international meetings and agreements it says that economic growth is the solution, not the problem.

No, really, growth ‘n’ money ‘n’ stuff cure climate change, not cause it.

So, if the kids start to shout at you about this – maybe the nephews, grandkids – just get them to read this page.

This is the actual science the whole thing works from. And it says that economic growth is higher in the answer that beats climate change, lower in the one that doesn’t.

So, Greta’s wrong, because economic growth is the solution, not the problem….

We Got 14.3 Million Illegals Here
By Tim W., a highly placed source in Europe

That’s a little under 5% of everyone – too many, right?

But the best we can count them, that’s how many there are. It being, you know, difficult to count people who don’t want to be counted?

Maybe that wall along the southern border would be a good idea – after all, we’re not exactly worried about the Canucks arriving, are we?

But that’s not the big problem at all.

Sure, not letting in people who shouldn’t be here is a good start.

But the big one is what happens to people who shouldn’t be here after they are.

At least $131 billion a year, that is. Which, as the man said, a billion here, a billion there and that’s real money soon enough.

Our problem is that half the politicians don’t want to do anything about it.

Or, when we listen to the Democrats, want more of it. More out of our pockets to people who shouldn’t even be here.

People actually go to court to make sure illegal aliens get welfare.

Whole organisations dedicated to the idea that we should have to keep spending our money on ‘em.

And of course Big Pharma doesn’t want you to know about it… not when it’s this cheap and this simple.

Big Pharma would rather keep promoting the unending lie about diabetes…

Trump is changing the rules so even if you’re legal you can’t get public assistance, but immigrant activists keep sayin’ it’s a denial of human rights if illegals don’t get our bucks?

Then there’s those sanctuary cities

Places that just say “We ain’t obeyin’ no law.”

Cities that refuse to work with the Feds when they come ‘round to collect the illegals.

Trump is changin’ this too – he’s insisting that the illegals that do get rounded up get sent to those sanctuaries.

The people arguin’ that everyone can come. There is actually a law about this.

International law, the US has signed up to it. You need asylum then sure, we’ll give you asylum.

You’re running in fear of your life? We’re good folks, we’ll take you in and make you safe.

The thing is, you only get that asylum if you are running.

If you’ve already reached someplace you’re safe then you get it there, not in the US.

Mexico is safe, so that’s where you get it if you’re walking up from Central America.

Trump changed policy so that it agrees with that law. The Dems are shouting about it again because they just want anyone to come in.

You know who should be really pissed at this?

Immigrants, that’s who. You come to the US all legal and righteous, work hard and get a green card, then citizenship.

Then some scumbag just walks over the border and gets all the same stuff? Gonn’a piss you off, right?

And it does too, because the illegals compete with the recent immigrants for jobs.

14 million illegals – the first part of the cure is to agree that we’ve got a problem here.

And we do, but only one half of politics is willing to agree with even that….

How Many Illegal Aliens Live in the United States?
https://www.fairus.org/sites/default/files/2019-09/IssueBrief_How-Many-Illegal-Aliens-in-the-US_2019.pdf