Is Trump a Kurd Killer? Lamestreams say yes, we say no

Hey, it’s Ashleigh here, and I had a mirror in my old Ford Focus that said “Objects in mirror are closer than they appear.”

This is also what I call fake news appearing real. Exhibit 1 is the current blowhards on the Kurds and Syria.

The truth: The Kurds got screwed over at the end of World War I. They did not get their own country. Eventually they should.

But now, suddenly, now that Trumpers withdrew, the Kurds have smartly allied themselves with Syria.

This is actually super GOOD news.

The U.S. is no longer involved, and Turkey is taking steps to protect itself against the Kurds, and Syria and the Kurds have made peace.

There is no incentive to import more Islamic terrorists as there was when the U.S. was involved.

But remember: the Left hates peace.

And the CIA and FBI are totally against Trump. They want total forever war.

Bloviating about sanctions against Turkey, an important U.S. ally. 50 tactical nukes are hosted in Turkey.

Trump should be proud of his decision and explain it better… then pull the U.S. out of Afghanistan and Iraq and become a Peace President.

And the Left loves controlling everything. They love the $15 minimum wage — but it results in lower paychecks for workers at Target. It is a disaster in the making.

Check out this natural cancer cure THEY don’t want you to know about.

And Congress is accusing the Russians of colluding to promote vaping.

This Russian Bot story is taken seriously by the Left despite it being pure fantasy.

But you see, the fake news Russian Bots is a way to discredit real news and replace it with fake news appearing real.

Walk around Washington D.C. and see the Atlantic Council building.

Who is the Atlantic Counsel? Puppeteers pulling strings, instigating the Obama coup in Ukraine and enriching Old White Guy Biden and his Boy Genius Son Hunter.

This is how corruption works in the USA.

Obama toppled the elected president. Brought in his cronies and handed Ukraine billions…

…then VP Biden and his son take in huge sums from the crooked Ukrainians and it’s fully legal.

And then they investigate the legitimate President because he asked Ukraine to investigate. Ha!

And the Left lives in its own reality where killing babies is A-OK and where a man with a beard and a penis becomes a woman simply by insisting he’s a woman, says Chelsea Clinton and a handful of nutcases on the Left who are running things today.

Finally, here is a graph of temperatures, calculated in 1974 when they were promoting “the next Ice Age” as The Big Threat: 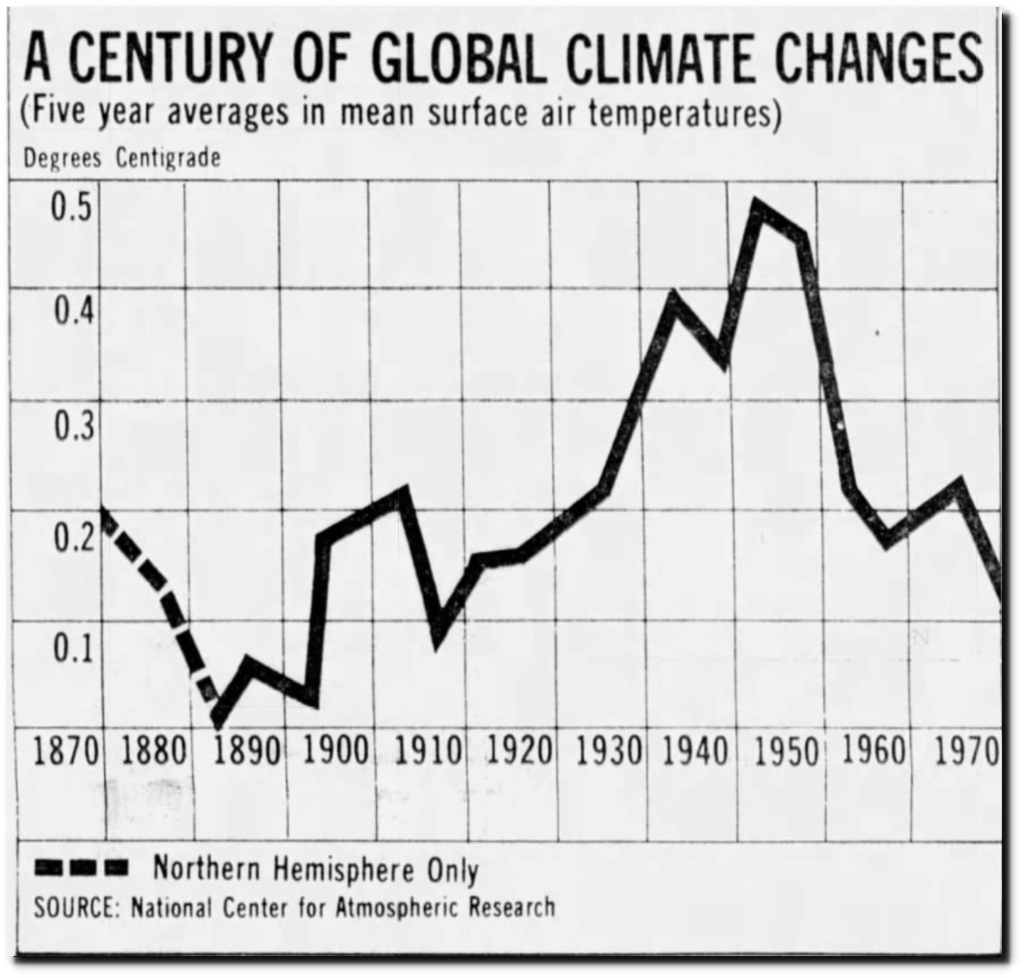 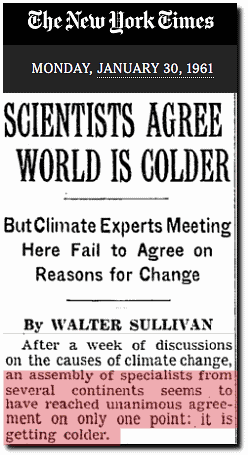 And here’s how they doctored this today, substituting fake data for real: 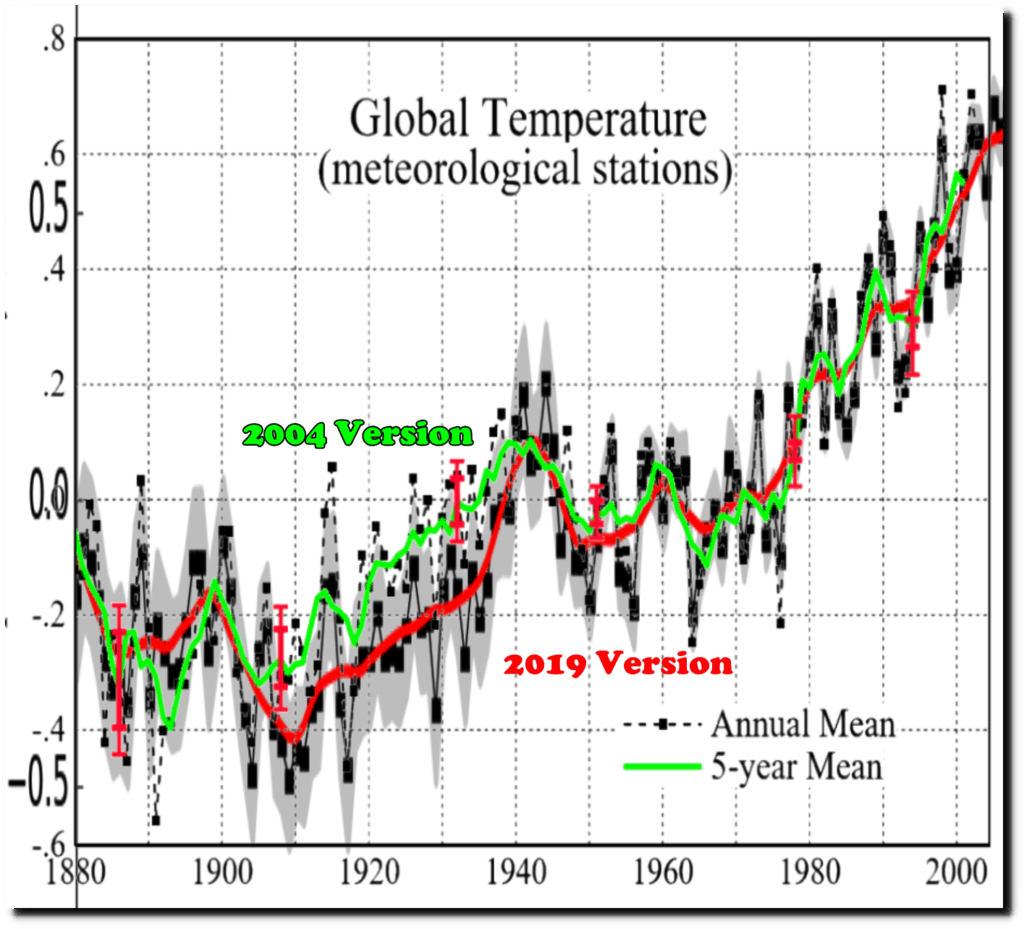 See the trick? The new version shows alarming warming when the original with clean data shows COOLING. The truth is in these headlines: 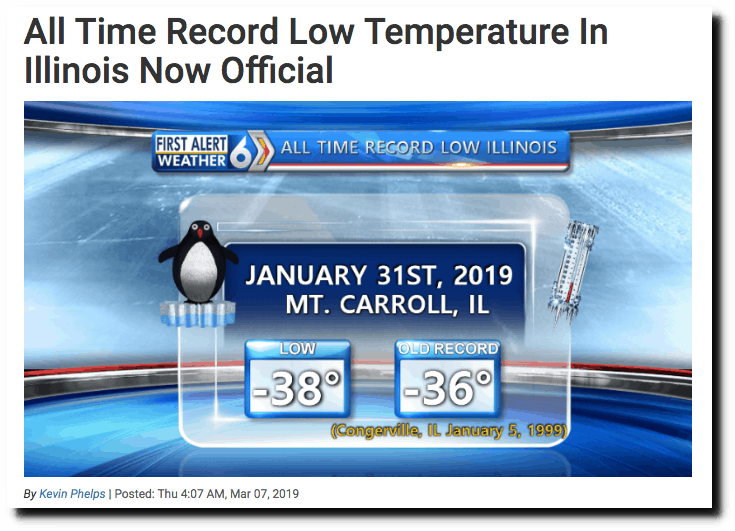 And this just in — the snowiest EVER for this early…winter 2 months away and we’ve had a record setting blizzard in the Midwest, snow in Denver and very cold weather.

And the Extinction Robots continue gluing themselves to public structures and bleating about climate change so that the City of London must take extraordinary actions against these nutcases. Wait until we have them here in the USA — just wait. You have no idea the havoc these people will cause.

Outperform other men all over the world with this natural T-booster. 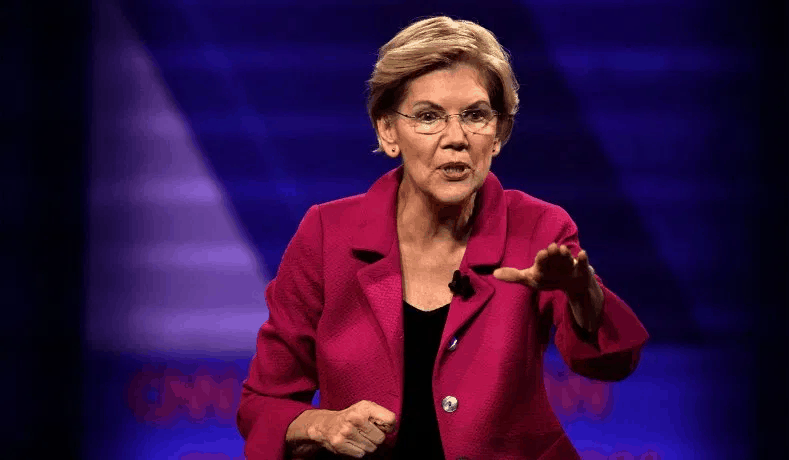 She indigenous now or not?

It’s important to celebrate these special vacation days like the one we just had for Columbus.

Because there’s an awful lot of people saying we should stop having them.

That we don’t celebrate some European who never even visited the country — Columbus didn’t, he discovered the Bahamas in fact — but instead the people who were already here.

OK, sounds good and why not?

So, no to the Italian who couldn’t even have lasagne because Europeans didn’t have tomatoes yet.

Celebrate instead the indigenous people who arrived 11,000 years earlier.

Cool. Except, except, what’s the actual lesson here?

There is an old story about Sitting Bull meeting the President.

Harding maybe, goes off to the reservation to meet the old man.

“So, does the Indian chief have advice for the President of the United States? Har Har?”

Because what is Columbus Day?

The celebration of that great big neon sign saying: “This Way Folks!”

And with the folks came all those diseases and problems that killed off the locals.

Wiped out maybe 90% of those indigenous peoples.

So instead, we should celebrate those who died, not those who arrived.

OK, we’re cool with that, just how should we celebrate it?

An easy, natural way to grow bigger “down below”

Most men wonder: “Can I really increase my member size?”

And the answer is yes. Yes you can.

But not anymore. There’s a better, natural way to get a bit bigger and fatter “down there.”

And it really works — by naturally increasing important male hormones like testosterone and DHT.

But you know what’s so great about this idea? Indigenous, not Columbus?

The same people who say we should celebrate the one, not the other, say that we can’t do the same thing now.

That is, we’re not allowed to limit immigration. Because reasons.

Even when we’ve got to celebrate those indigenous who didn’t immigrate.

Even when we’ve got to apologise for having immigrated.

We must still have open immigration today. Because, well, why?

Why the heck aren’t we the indigenous now?

Actually, we are the indigenous. It’s just that no one’s allowing us to decide these days.

We’re racists and worse for even thinking about those borders.

Bad people for even wondering whether an open door to every poor person in the world is a good idea.

Even as we’re supposed to not celebrate the guy who started the process of our own immigration.

And to celebrate those who didn’t and weren’t all that happy about our doing so.

Just another one of those pieces of twisted logic out there.

But as we know, if lefties understood the world they’d not be lefties, would they?

Why, if our own immigration isn’t something to celebrate, if that’s true, then why the hell do we have to have so much more of it?

Raising The Minimum Wage Is A Great Idea? Maybe not!
By Tim W., a highly placed source in Europe 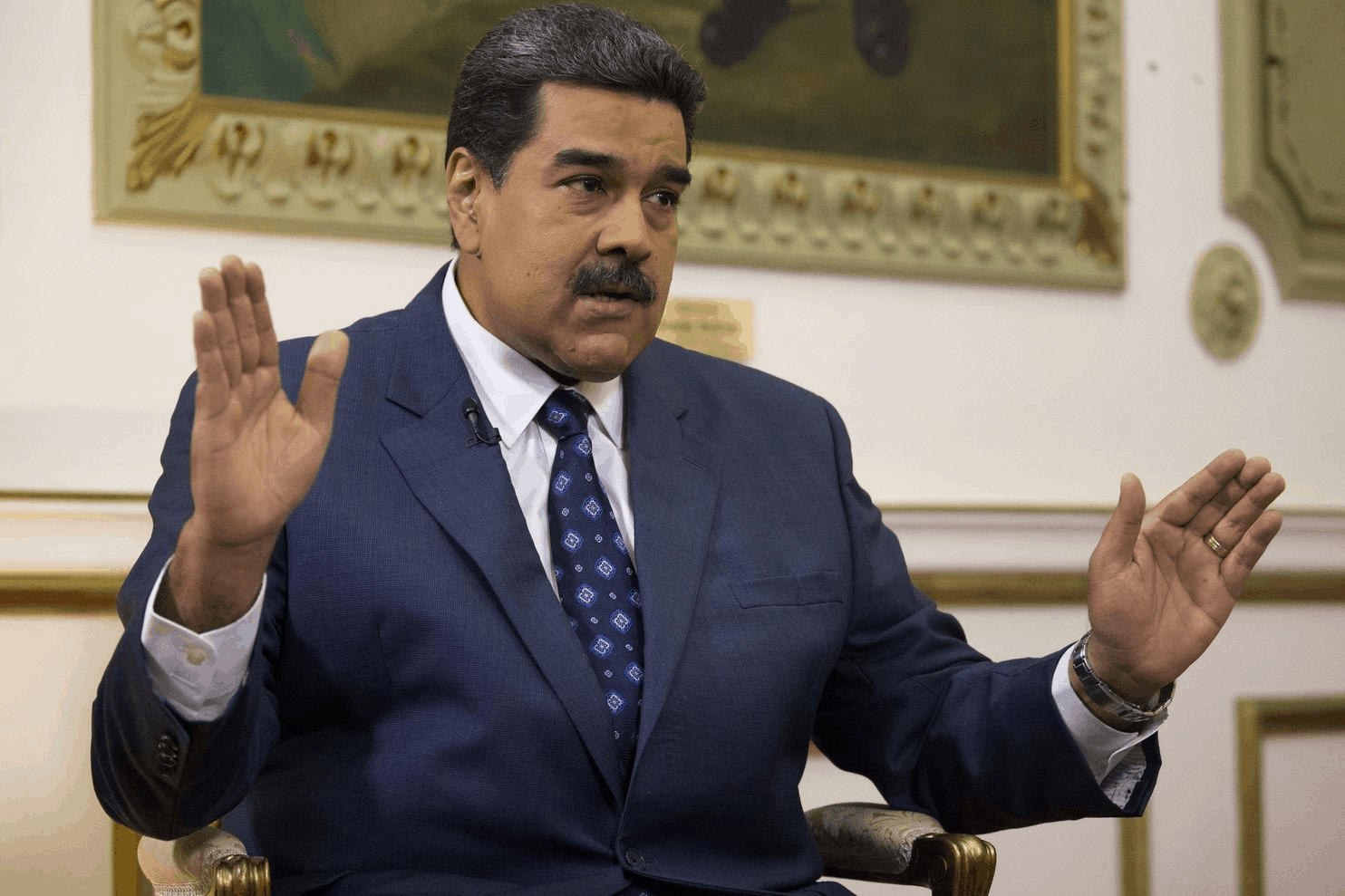 The minimum wage is gonna be this big

We should give them all a pay raise, right? Raise that minimum wage.

That’s right, we should force other people to spend their money as we want them to.

And nothing will go wrong, will it?

There being two problems here…

The first is this is other peoples’ money. How come we get to tell them how to spend it?

What’s righteous about us telling people how must they must pay their workers?

As long as it’s all voluntary, people going to work because they like the deal, then why our business?

The other problem being more practical. Because of course, things do go wrong.

But nothing ever happens in isolation. What else have Target done?

They’ve cut hours. And not just by a few.

If folks work more than 30 hours, then they get health care.

So, they’re cutting most people down to less than 30 hours.

The thing is, this is predictable.

The right wing economists who look at this all say the same thing.

Sure, you can have a higher minimum wage.

But there will be fewer jobs, or fewer hours. Or less in side benefits like health care.

Sure, the Waltons are rich and Walmart’s a big company.

But force a $15 minimum wage on ‘em and there are no profits left at all.

So, force a high minimum wage on capitalists and they’ll change something, so they still gain a profit.

Prediabetic and diabetic men – are you eating any of these 5 foods?

For decades, the U.S. government has been telling men to eat these 5 foods.

And yet, real studies show these 5 foods CAUSE diabetes.

Could it be that Big Pharma has “captured” the US government guidelines?

So today, following government guidelines, we’re sicker than ever.

More than 29 million adults in the U.S. — over 10 percent of the population — currently have diabetes…and still more have “pre-diabetes”…

And most shockingly – the foods that Big Pharma recommends are actually making people sicker with diabetes and heart disease.

That’s why I put these 5 bad foods here…prepare to be shocked. You probably ate 2 of these foods just for breakfast.

Higher wages and less of something else going to the workers.

The lefty answer to this is just that employers are pigs. So, we must force them.

Well, yeah, right. But if they really are pigs then they’re not going to give in, are they?

They’ll do something to beat the idea.

Heck, some of them — like a lot of small restaurants in NYC — will cheat the righteous minimum wage just by going out of business.

How about that for being evil?

The basic problem here is that insane insistence on only looking at the world as lefties want it to be.

Sure, higher wages for poor people is a great idea.

But passing a law to make them higher doesn’t work. Because people do that other stuff.

More, when people do that other stuff, like cut hours, we get told we must have another, new, law.

To stop the cutting of hours. Or health care. Or rest breaks, whatever.

Instead of the sensible thing — hey, you know what, this minimum wage thing is more difficult than we thought.

Maybe we should stop trying to raise it while we work things out?

But then, you know, good sense and lefties…

But then, glory! Look to Venezuela, where Maduro just raised the minimum wage.

Hey, $8, that’s pretty good for a country much poorer than the U.S., right?

That’s sticking it to capitalism sure enough.

Target Cuts Workers’ Hours after Vowing to Raise Minimum Wage to $15 By 2020
https://news.yahoo.com/target-cuts-workers-hours-vowing-195700239.html